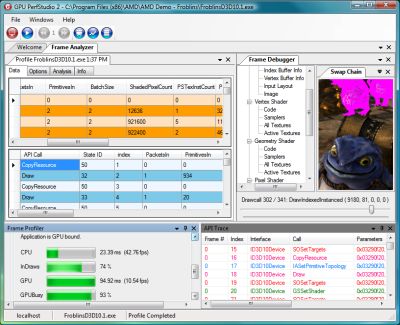 Easily analyze the performance of your applications and give you the information you need to: Identify where the bottlenecks are, and what the performance problem is before you even build your application. Automate benchmarks in a fast and efficient manner. Identify where applications are spending too much time in their most performance sensitive operations. Understand what's happening during run time and even determine how much time is spent doing specific operations. Identify hot spots in your app as well as the most computationally demanding operations in your app. Manage the performance of all your apps as well as all of your GPU resources. GPU PerfStudio 2 is available for Windows 7 and 8 and should work in Windows 8.1 and Windows 10. To get the latest GPU PerfStudio 2 release, visit the official site or the GCN User Community. Please note: GPU PerfStudio 2 is an entirely new product. Support for previous versions will be discontinued. With the free Live View Pro app, you can stream videos to the new LG UltraFine Display, a 30-inch monitor with no bezels that goes anywhere you want to. It also features brilliant 4K resolution and a full range of connectivity options, including an HDMI 2.0 input. This free app also supports Mac and PC so you can show off your content on both platforms. The free version is ad-supported, but it comes with a few valuable features. For example, you can share videos to your social networks and email, as well as to a computer or printer. Plus, you can browse photos from your Android or iOS devices and use the camera to take photos. Celerino Celerino is a fast, ultra-compact high-performance computer that can process things up to twice as fast as a smartphone. And it fits in your pocket. It features a choice of four ARM Cortex A-series processors running at up to 2.5GHz (or 1.6GHz and 1.2GHz), and up to 32GB of RAM, 4GB to 16GB NVM (Non-Volatile Memory). You can configure Celerino for as little as €59, depending on which processor you choose. Celerino supports all common operating systems, including Android (v5.x and higher), BlackBerry OS (v7.x and higher), iOS, and Windows Phone. And the up-and-coming Firefox OS on Firefox